I plast, you plast, we all styroplast!!! I'ts finally been done... All the hill panels are carved out, plasted and coated with white primer.

The styroplast works great. I only needed to create the 1:3 mixture and apply it with a brush, just like painting. I started out with 200 ml, but only need about 50 for each hill. So, when doing the first hill I thought hell, why not do another one. While doing the second hill I noticed the mixture was beginning to set, but still continued doing a third one.
The thinker the mixture, the harder it gets, getting it between all the crevices. The third panel lost some of its detail because of this. It's hardly noticeable from afar, but up close it looks like it's snowed under. Below some pictures of the result: 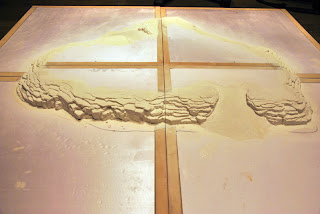 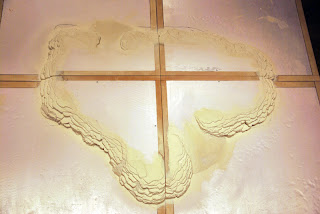 Apart from the sand, stones and grass, the hills are now considered finished.
This brings us to the next step. Applying the surface to all 12 panels. In my next post I'll go through the process of creating the surface getting everything ready for painting.
Posted by Dreamfish at 9:26 PM