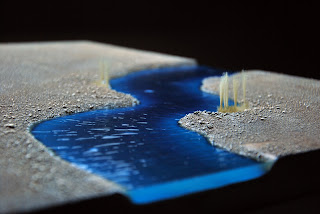 When I started this project, I made sure I knew how to make water. I think Mike down at TerranScapes makes the best water effects currently out there. Mike is what you call a professional terrain builder, and does this stuff for a living. It's no secret that most of my inspiration came from him. I learned a lot just by looking at his videos on YouTube. Too bad he doesn't do tutorials, it would have saved me a lot of time and money.

Luckily for you, I'll try to explain what I learned through trail and error. It took me to make seventeen test models before figuring out the exact methods. I went on a holiday and when I got back it took me another two tests to remember them again. I should have written them down somewhere.

Anyway, to create the water effect shown below you will need the following materials.


The paint is used to dictate the color of the water and its depth. This is done by painting the ground surface of the river in the desired color and blending it accordingly. Typically, you'll want to paint the shallow parts of the river in a lighter color than the deep parts. Useally by blending from the center of the river to the borders. The quality of the blending determines 80% of the overall outcome.

I chose to make a typical blue river. While I was able to blend the various test models with acrylic paint fairly easily, I discovered it to be a lot harder on a larger surface. Although certainly not impossible, you need to work quickly when painting with acrylic paint. A bit to quick for my taste. Therefore, I decided to work with oil paints instead.

I've never worked with oil paints before, and I must say they're wonderful. The biggest advantage is the amount of time you have to paint your work. You can literally spend days correcting the paint-job. Sadly enough, this is also the biggest disadvantage. It takes ages to dry, but then again I believe the results are for the better.


Protect the paint-job with varnish. The epoxy can have a deteriorating effect on the paint. I've had test models in which some parts of the paint were affected by the epoxy. Make sure the paint is completely dry before pouring the epoxy, believe me, I'm not renowned for my patience.

Pouring the epoxy is pretty straightforward. First close the river ends with masking tape. Measure the amount of epoxy you need to make by pouring real water into the river. Remove the water, refresh the masking tape and mix both epoxy and hardener 2:1 in a container. At this stage add the desired pigment to the mix and pour it into the riverbed.

The tricky part is the amount of pigment you need to add the mix. Too much pigment will obscure the underlying paint-job, and too little will show too much of it. The right amount will help blend the underlying paint-job. I experimented with dark blue transparent dye, Vallejo Game Colors and oil paint. The Glass Attic website explains everything you need to know about this.

I chose to use the oil paint method, because I wanted to use a turquoise color. If I had a turquoise transparent dye, I would have used it instead. I needed to thin the oil paint with thinner, otherwise it wouldn't dissolve properly in the epoxy.

To avoid subtle color differences in between river panels, I created one big batch of epoxy and did all five river panels at once. I measured the required amount for each river panel. In my case I needed: (250 + 250 + 350 + 275 + 230)  = 1355 - (1355 / 3) = 903 ml of epoxy and 451 ml of hardener. With a margin added I ended up making 1.5 liters in total. After pouring the epoxy in a big container I added the pigment (thinned oil paint). Stir gentle when mixing the pigment, otherwise it will create bubbles.
While adding the pigment I tested the color and its transparency on a testing piece. This gave me a good indication of the amount of pigment I needed to add.
I divided the big batch between five smaller containers, each having the required amount of epoxy for its designated river panel written on it. Finally, I poured the hardener into each container, stirred it gently and poured it into its designated river panel, and made sure all five river panels were placed on a leveled table.

Depending on the amount, it takes about 16 hours for the epoxy to completely set. When finished it looks like this.

It's possible to add static grass, field grass or other scenic elements, either before and/or after pouring the epoxy. Some materials like reed do tend to soak up the epoxy, making them shiny and rock hard when it sets. To circumvent this problem I recommend doing reeds after the epoxy sets, by drilling holes into the epoxy and gluing the reed in place.

The epoxy at the river ends will usually curl up a bit when setting. It's possible to sand it and/or level it by cutting it with a sharp knife. This will obviously leave clear markings, but don't worry, the Mod Podge will make it disappear.

At this stage the water looks unnaturally still and flat. To give the impression the water is moving, I created little waves on the surface of the water with Mod Podge. It´s basically a transparent all-in-glue mostly used for decoupage. Pour some of it on top of the surface, spread it out with a brush and create the desired patterns with it. Work gently, otherwise bubbles will form inside the glue.

There are tons of methods out there for creating waves. I only tried the Mod Podge method. Again, Mike from TerranScape knows a lot more about this than I do. He made videos about this in which he explains and tests various materials. 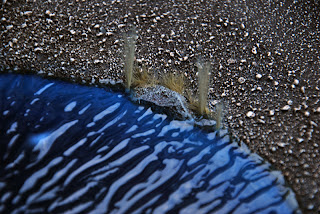 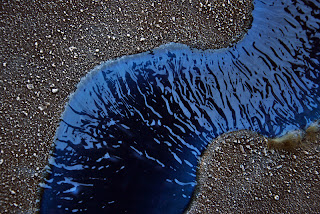 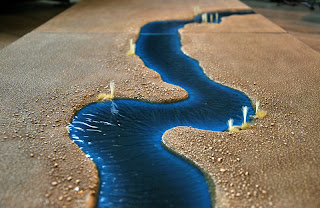 I'm very pleased with how the water turned out. The pictures represent them well enough, although they don't seem to capture the clarity and the exact color very well. In RL the water has somewhat more turquoise color to it.

The only thing left to do, is the grass as explained in my previous post, but first I'll have to Mod Podge the other four river panels.