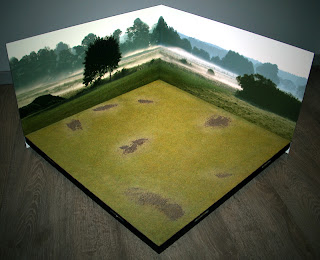 In my previous post, I've promised to demonstrate the table in all it's glory. While planning the various setups, I realised I was missing something.

When using the table for the purpose of photography, one needs a suitable backdrop to make a pleasing photograph. As the co-author of two remote gaming battle reports, I experimented with various methods. For the battle reports "It's fun to slay at the Wyemm Seeyay" and "The Shadow of Koles Lorr", I simply printed one out and glued it on a piece of cardboard. The cardbaord had a little footstand attached to it, allowing me to put it anywhere on the table wherever I needed it. Although it served its purpose, this method has shortcomings, for example: the limited size only allows close-up shots, corner shots are not possible and it lacks a tight fit, creating a space between the ground surface and the bottom of cardboard.

To make the table as complete as possible, I improved the above method somewhat by creating two backdrop panels. These panels use the same attachment principle as the borders, allowing me to attach them at the sides of a panel.


The panels are made out of Dibond. Dibond is a composite consisting of two sheets of .010" aluminum with a polyethylene core. It is intended for such applications as signage, exhibit/display as well as digital mounting. Available in 1/8" thickness. Lighter than than Aluminum and Plexiglas but also very durable and flexible.


I bought a panoramic photograph on dreamstime, and plotted the photograph on the Dibond panels with a FUJIFILM Acuity Printer. I've got access to such a device at my work, but there are enough companies out there who offer this as a service. It costs around 60+ euro to print 120x30 cm.


The cutting of the placeholders for the male "Kugelschnaeppers" are done with a milling machine. Again, they have one of them at my work. I've made a video of this, because I think this is the kind of machine every wargamer would like to have in his man cave. Just listen to the sound of this thing:

The "Kugelschnaeppers" are glued in place with Epoxy. This seales the cut-outs and makes a solid connection.

The concept seems to work, but while working on this, some other ideas on how to improve it formed in my mind. Also, I'm not completely sure about the scale of the backdrop, maybe I'll be creating some new panels in the future.

For now, these are the backdrop panels I'm going to use to make a proper demonstration of the table. To be continued...
Posted by Dreamfish at 10:32 AM