The Pantheon of Chaos - Demon Lord of Aethus

During the last 16 months sparks of imagination did occur but none where big enough to lite my fire. Eventually a good old game of Hero Quest with the boys and their nephew did the trick. We played the quest "Necromancer's Lair" by Dewayne Agin. A single quest with three levels for a group of heroes.

The group consisted out of three heroes played by my boys and their nephew. We played two games, one at midday and one at night. Each game brought them one level further down the dungeons. At the end of the second game at around 11:00 PM they where pleading to finish the last level.

But we had to stop and I promised we would finish the last level when the oppertunity would arrise. At least this would give me some time to arrange a suitable miniature to represent Braun Von Baug (the demon Shantil summend).

Having invested in The Pantheon of Chaos by Diego Seratte Pinilla kickstarter it wasn't difficult to determine which miniature to use. The next time we play Hero Quest, this bad boy will be standing ready.

Welcome to the follow-up of my previous post where my boys where able to select their own version of coolness. It took a while to find the miniatures, but once they did arrive all was ready to start painting.

The deal was as follows They would paint their own miniature completely in base colors first and afterwards apply various whashes. In between the fases I would correct various parts and finish the highlights.

You might wonder why I helped and I realize it is not an easy question to answer.

I wanted to achieve two things with this little experiment. The first one - getting them to experience what is needed to completely paint up a miniature. The second one - own your own cool miniature to play games with.

I thought if I didn't correct their work they would possibly complain about how their miniature looked in comparison to the other miniatures. That and I must honestly say that my own tendencies for perfection might had to do something with the decision.

We've played some games and had fun, but I later realized they are still far too young to be seriously painting anything. As a dad you kinda want to share this love for miniatures, but you also know you cannot force it. In a way this little experiment confronted me more with my own expectations and whishes than it had any effect on the boys.

For example: a week or two after we painted them they didn't even remember they had miniatures at all. No matter how you look at it, that kinda hurts.

I decided to drop the effort on the kids department and let them make some effort themselves. If they're really interested they will come someday and when they do I'll remind them of the miniatures they have painted. 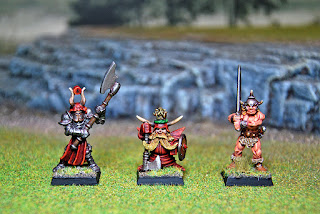 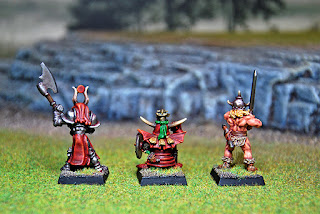 Contemplating on how to exploit this interest of theirs I've setup a little experiment to see where it might lead.

The experiment requires heroes and monsters. The kind of which stand out and makes you say "cool". Upon investigating my painted collection I realized a real shortage on the "cool" monster department and heroes far that matter.

Something needed to be done, my fatherhood was at stake. First priority was the "cool" monster shortage. Diego and his Phanteon of Chaos kickstarter fixed that dilemma real quick. I probably might have spend a tiny bit too much on this, but better safe than sorry, right?

Someone needs to paint all that new lead arriving once in a while. You might resort to drastic methods suggested by others or you might want to invest in the future and train your personal eavy metal team.

So, to give them a head start I gave the boys the tools and full responsibility of their own workbench. They can paint whenever and with whatever they like. Some might need to go through some fases before they're able to make this step, but I think it's for the better. If I needed to be with them every time they want to paint they hardly get to paint anything.

While they're on their own practising the arts of the hobby I've let them pick one hero from the various Citadel Combat Card decks. The task was simpel, take one card you think is cool. I then searched and bought the selected heroes. I will help where needed to paint their hero using the combat card as a painting reference. Once we each have painted our hero we will roam the world and battle monsters where no monsters have been battled before!

It's like falling in love with someone you think is beautiful, but actually isn't and it takes years to realise it. I'm talking about Dark Elves from the 90's.

My inspiration came from the 80's, but my financial strength became sufficient in the 90's. So I ended up buying a Dark Elf army deal. Big box, purple border, and the picture contained a skull tower I believe. It was the latest craze at the moment.

Years have past, and finally I'm able to rectify the error of my doings. I proudly present the first painted regiment of my 80's Dark Elf army. 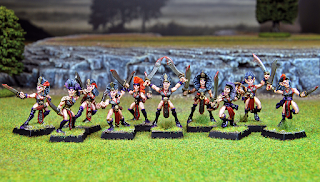 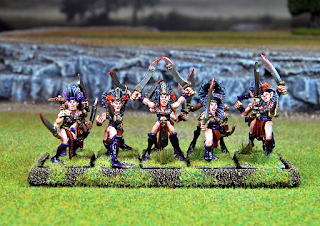 In the last couple of months I've played some games of Oldhammer. From these games I've learned that my army choice options in the monster departement where quite limited. I've got plenty of unpainted monster lead lying around, but the task of painting something bigger than usual always scares me a bit, until today.

Determined and inspired I opened the old lead box and got myself something big to paint. No plan, just straight to work. I followed this airbrush tutorial so I wouldn't have to worry about anything, but painting.

I really surprised myself how quickly I got this thing painted. It took me about 8 hours from start to finish.  Below the results: 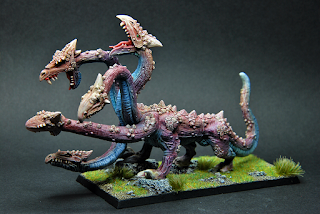 Having finished the Skull Chuckers in a relatively short period. I took it upon myself to finish what was left of the MD8 boxset.

Again, I followed the same painting procedure explained in the (evil) Skeletons - Quick Paint Tutorial post. This allowed me to finish the bones parts rather fast and easy, thank god.

The chariot is placed on a 100x60 base which I bought from GW. Yeah I know, one of the few usefull products they still have.

The highlights on the robes of Morbius are done with the airbrush. I only needed add some washes to get the results you see in the picture. I'm particulairly happy with his face and robes.

Because my skeleton horde has grown considerably since my last painting efforts I thought to treat you guys with an army shot.

So, whats next? Dark Elves or Undead legion?

*cough, cough*, man this place is dusty! Let's bring in some fresh air and open a window. Ah, that's better. Now, where were we?

It's been exactly one whole year since my last post on this blog and about time for another post. I got stuck while working on a regiment of Marauder Dark Elves. Sometimes a game of oldhammer is all you need to rekindle enough inspiration to start painting again.

I followed the same painting procedure explained in the (evil) Skeletons - Quick Paint Tutorial post. Chances are I'll paint up the rest of the MD8 boxset for my next project.


Below the result of my efforts. 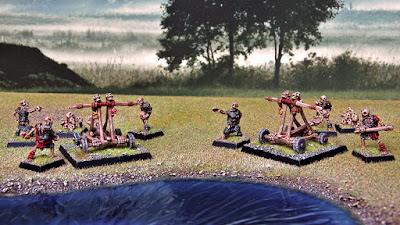