Fully equipped with knowledge, wisdom and understanding of my previous project, I set out to paint another squad of five terminators. I wanted to paint a squad of Ultramarines, just like how they're depicted in the Space Hulk 2nd ed. mission book. 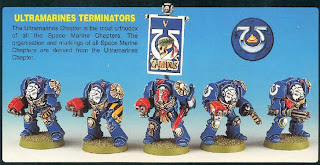 A member of the Oldhammer Forum was kind enough to help me out with the sticker banner from the 90's. Thank you Muntantdale, I'll think of you everytime I look at them.

I also bought the transfers from ebay which in the end didn't work out. The shoulder and knie pads were simple to round for the transfers to stick to. They ended up all folded and horrible. No wonder the Eavy Metal painters painted them on.

I wanted to use the airbrush as much as possible and try-out some masking techniques. I'll try to summarise some of the airbrush work below.

This is what the miniatures looked like after cleaning, assembly and base coating them white. You can see I left the arms unassembled for easy painting. 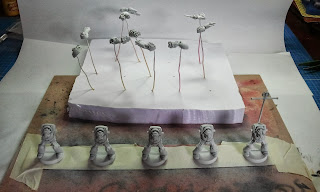 I applied a blue base color with the airbrush. Unlike painting by hand, the airbrush applies a very thin layer of paint. Make sure all parts have equal coverage by inspecting them afterwards.

For the highlights I used the "above" direction, so light is coming from above at an angle of about 45 degrees from all directions. I keep the angle, but turn the miniature around while spraying paint with quick "flyby" sprays. Sometimes I adjust the angle, some parts just don't get enough paint otherwise or I only spray over those parts that need a little extra. I also set the spraygun to a certain maximum limit. This helps me not to spray too much paint at once.

I added two more highlights and worked my way up from blue to white and applied an dark blue oil wash afterwards, which I sealed with Testors Dull coat.


I used the masking tape technique to paint the heads. With the new terminator models it would have been easier the leave them unassembled. Arbal over at Coloured Dust has written a nice article about Masking Techniques. I really want to try-out the Maskol technique one day. Too bad he wrote the article after I had finished the models.

I corrected some of the lines, applied several grey washes on the white faces and a red wash on the red face and base painted the other necessary parts black.

I taped the arms, sprayed the arms white and afterwards red, did a gradient on the power sword and base painted other necessary parts black.

The last airbrush task, the checkered stripes on the power fists. This one was a bit of an experiment. I wasn't quite sure if it would work. I printed the checkered stripes on paper, placed it over a piece of tape, cut out the stripes and placed them on the power firsts. It was a bit of puzzle to get them lined out correctly. Luckily, my first attempt was spot on. The stripes are 30 pixels in width and printed with a resolution of 72 DPI. Again, I sprayed first with white and afterwards with yellow, before removing the tape. The pictures below show the raw results after removing the tape. Taping took about 1 hour, the paint 10 minutes.

Afterwards I realise I've sprayed a bit too much paint, some of the stripes have a bit of a border. The results could have been better with less paint applied.

After painting the details manually, I ended up with this. Maybe there's still one last airbrush task left once I've figured out how to make good templates for the emblems.