Having finished the Space Hulk Terminators I found myself thinking of another airbrush experiment project. I wanted more practise and blend at least three different colors on a single miniature. Something like green, blue, yellow, purple color transitions. I figured the Cockatrice model I bought from ebay a couple months earlier would serve this project just fine. I used the following picture as a source of inspiration. 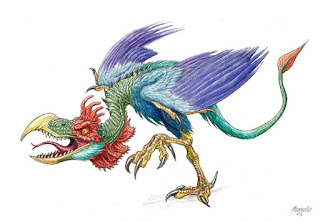 I used the airbrush to blend various colors from the top middle part of the body to the wings, head and tail using light turquoise as a central color. Form this color I used dark purple for the wings, green for the tail and red for the head and feet.

I started with the bottom and gave it a yellowish skin color. 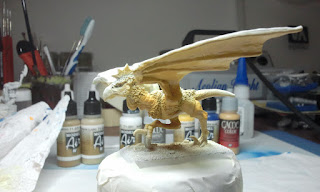 I gave the bottom light brown highlights. Colors used for the bottom are:

Which gave the following results: 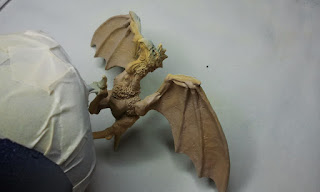 For the central blue color I used: 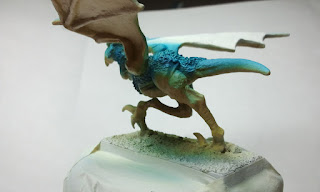 I sprayed the comb, the wattles, eye sockets and feet scarlet red. Sprayed blue green over its spine just within the previous light turquoise color, tail and into the crevices of its wings. Then continued with scurf green and finished the tail. Applied imperial blue into the crevices of its fur and top part of the spine and wings and finished with hexed lichen on the wings and spine. 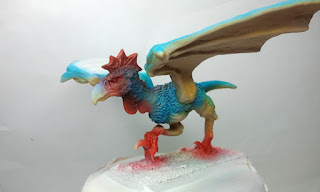 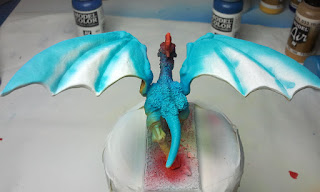 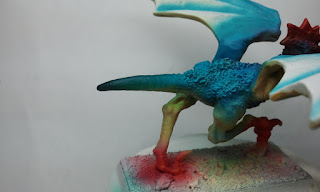 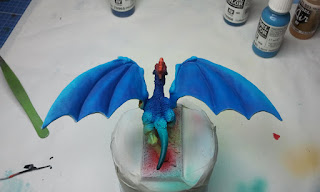 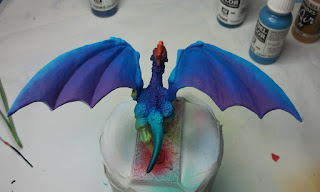 I finished fairly quickly with the airbrush part, but the manual part turned out to be harder than I thought. Usually when painting miniatures you know which parts are done and which are not. Having painted the whole miniature with the airbrush I had a hard time figuring out where to start. Besides, I didn't want to ruin the blendings achieved with the airbrush. The transition between airbrush work and manual applied paint can sometimes be a bit harsh and difficult to fix.

The last couple of months I haven't painted much, mainly because of this bird. I would just stare at it and think about what I will do next. Usually I ended up in doing nothing at all.

Eventually a large order of lead from foundry and tabletop-world cured me of my passiveness and I finished it before the shipment arrived.

Anyway, below the end result of my personal colorful cockatrice. 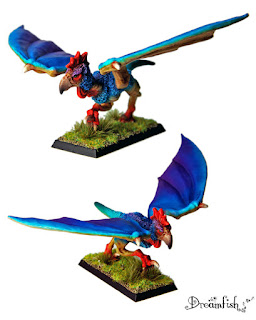 Posted by Dreamfish at 5:07 PM